Looking for science books for middle grade-aged children (9-12)? Here is a list of high-quality science books for older children. Edit:  See also our list of books in the Scientists in the Field series added in 2014. 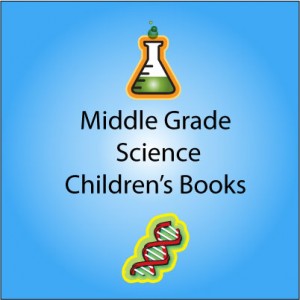 (Disclaimer:  I am an affiliate with Amazon so I can provide you with cover images and links to more information about books and products. As you probably are aware, if you click through the highlighted title link and purchase a product, I will receive a very small commission, at no extra cost to you. Any proceeds help defray the costs of hosting and maintaining this website. )

Eruption!: Volcanoes and the Science of Saving Lives (Scientists in the Field Series)

, by Elizabeth Rusch with photographs by Tom Uhlman (2013), follows the nail-biting experiences of USGS volcanologist  John Pallister and his team from of the Cascades Volcano Observatory as they race to provide the most advanced equipment and information around the world to those predicting when volcanoes will erupt.

Silk and Venom: Searching for a Dangerous Spider by Kathryn Lasky is a new biography of arachnologist, Greta Binford.

Scorpions: Armored Stingers by Sandra Markle is part of the Arachnid World series. This book gives an overview of scorpion biology as well as compares scorpions to other arachnids.

Oil Spill! Disaster in the Gulf of Mexico by Elaine Landau is a succinct account of the explosion of the Deepwater Horizon drilling rig in April of 2010 and the subsequent oil spill.

Hummingbirds: Facts and Folklore from the Americas by Jeanette Larson and Adrienne Yorinks with illustrations by Adrienne Yorinks, is a blend of past and present that combines factual information with ancient wisdom of pourquoi tales. Splash in fabric art illustrations and you have an interesting cultural mix that is uniquely American.

The Manatee Scientists: Saving Vulnerable Species by Peter Lourie, part of the respected Scientists in the Field series, follows scientists from around the world trying to learn more about manatees in a race protect them from extinction.

Elephant Talk: The Surprising Science of Elephant Communication by Ann Downer is a comprehensive look at elephant social behavior, including a detailed overview of exciting recent findings about how elephants communicate.

by Cindy Blobaum is an amazing book that sets a new standard for how hands-on science should be done. It is sure to appeal to budding scientists, particularly those interested in becoming ophiologists.

Albert Einstein and Relativity for Kids: His Life and Ideas with 21 Activities and Thought Experiments (For Kids series)

A Black Hole Is Not a Hole

by Carolyn Cinami DeCristofano and illustrated by Michael Carroll

Sneed B. Collard III’s Most Fun Book Ever About Lizards

by, you guessed it, Sneed B. Collard III

The author reveals a real passion for his topic, and in fact admits a “special love of reptiles” in the author blurb on the book jacket. This love of reptiles has led him to include a section on lizard conservation and also a realistic look at keeping lizards as pets, which he doesn’t encourage for reasons he has obviously thought carefully about. The bottom line is that Sneed B. Collard III’s Most Fun Book Ever About Lizards is a must-have for budding herpetologists, and an interesting and entertaining read for the rest of us.

Citizen Scientists: Be a Part of Scientific Discovery from Your Own Backyard

(Smithsonian) by Mary M Cerullo and Clyde F.E. Roper is a fascinating look at a mysterious creature, and a wonderful glimpse into the scientific process as well.

Moonbird: A Year on the Wind with the Great Survivor B95

The title refers to a tiny bird who has flown an estimated 350,000 miles – over the distance to the moon and halfway back – in his lifetime! The moonbird is also known as B95 because that was the number he was banded with in South America in 1995. He is a male shorebird commonly called a red knot.

The Plant Hunters: True Stories of Their Daring Adventures to the Far Corners of the Earth

Space, Stars, and the Beginning of Time: What the Hubble Telescope Saw

A history of the Hubble Telescope and overview of how the images it has captured have added to the field of astronomy.

Explains the most recent view (2011) of the planets in our solar system, with eight planets in the classical sense and five dwarf planets. Includes information on some of the moons, as well. Activities in the back, such as compare your weight on different planets and build a model solar system using objects from a grocery bag.

The Elephant Scientist (Scientists in the Field Series)

by Caitlin O’Connell and Donna M. Jackson with photographs by the first author and her husband, Timothy Rodwell.

Have you ever wondered what it would be like to study elephants in Africa? This book follows Dr. Caitlin O’Connell as she studies elephant social life and communication and at the same time works on ways to prevent elephants from ruining crops planted by local people. She discovers that elephants communicate to one another by detecting vibrations in the ground with their feet and trunks.

Dinosaur Discovery: Everything You Need to Be a Paleontologist

by Chris McGowan and illustrated by Erica Lyn Schmidt – this book is full of great hands-on activities.

Adventure Beneath the Sea: Living in an Underwater Science Station by Simon Basher is organized like a reference book, such as a dictionary or an encyclopedia. The different terms/concepts are developed as characters. The sections are written in the first person from that character’s point of view, and each section stands on its own.

Antarctica is not for the timid. The narration starts with the ill-fated journey of Robert Falcon Scott, who undertook an arduous trek across Antarctica only to find he missed being the first person to the South pole by 35 days. On the way back he and his team perished. Tragically, they were only 11 miles from a supply depot when they collapsed. This glimpse of history sets the stage for the hardships modern day explorers face in this land of extreme cold.

By Elizabeth Carney contains the dramatic, stunning photographs you have come to expect from National Geographic. Each animal is given a four page spread. The first two pages are amazing scenes in vibrant color. The second two pages are facts about the migrations those animals take that includes a map of the region where the animals occur (geography lesson). Inside Hurricanes (Inside Series)

With hurricane season well under way, children are likely to be curious about these enormous weather systems. Readers soon learn that as Carson says, “Hurricanes are disasters that have called ahead to say they’re coming.”

is an overview of the Census of Marine Life, a world-wide effort (carried out from 2000 to 2010) to survey, count, and investigate all the living things in the ocean. Johnson describes where and how the searches were carried out, and describes in detail some of the exciting findings. As of the time the book was published, the participating scientists had found some 5,600 new species, from tiny and colorful lobsters to zombie worms that feed on bones without the benefit of having mouths or stomachs.

By Sy Montgomery and Photographs by Nic Bishop is all about the strangest, most wondrous, and captivating bird on the planet, called a kakapo parrot. The kakapo lives in New Zealand, known for its unusual bird life. In this case “unusual” is an understatement. These large, flightless parrots (weighing up to eight pounds) have soft green feathers that smell strongly of honey, of all things. The sweet smell is thought to come from a bacteria that lives on the birds. They are active at night, and hide during the day in burrows under the ground. That is not where you would expect to find a parrot at all.

Planet Hunter, Geoff Marcy and the Search for Other Earths

Vicki Wittenstein begins by taking us to the site of the W.M. Keck Observatory in Hawaii. The telescopes are on a mountain so high that it rises above the clouds. The temperatures are below freezing, even in the summer, and getting to the telescopes is treacherous because of the narrow icy roads and high altitude (The author had to have an oxygen supply to visit.) Who knew that astronomy could be dangerous?

Prowling the Seas: Exploring the Hidden World of Ocean Predators

Even if you are only mildly interested in bats or find bats off putting, this is a fascinating book. Carson follows bat scientist Merlin Tuttle into a cave in Texas to find out what studying bats in like.

The Hive Detectives: Chronicle of a Honey Bee Catastrophe (Scientists in the Field Series)

This book examines colony collapse disorder or CCD – the problem with honey bees disappearing that has been in the news – by going right to the beekeeper who first noticed missing bees. Dave Hackenberg runs a large company, Hackenberg Apiaries. He moves thousands of hives around the country. When he found 400 empty hives in Florida, he knew something big had gone wrong and he sounded the alarm. Burns then introduces us to four bee scientists who are at the front lines of CCD research, and explains their roles in the investigation.

The Salmon Bears: Giants of the Great Bear Rainforest

The Secret Life of a Snowflake: An Up-Close Look at the Art and Science of Snowflakes

This Is Rocket Science: True Stories of the Risk-taking Scientists who Figure Out Ways to Explore Beyond Earth

When you think of extreme weather, an image of tornadoes or hurricanes usually comes to mind. Many more aspects of weather can be extreme, however, from temperature (both hot and cold) to rainfall (drought versus the extreme rains of monsoons). Hynes tells the story of all these different kinds of weather.