Middle grade readers can get to know what real scientists do every day in the award-winning Scientists in the Field series. How many have you read? 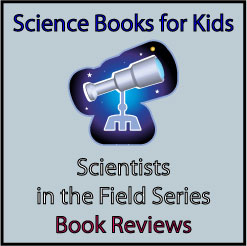 Note:  Books are roughly listed by publication date, from most recent to older.

Amazon Adventure: How Tiny Fish Are Saving the World’s Largest Rainforest by Sy Montgomery with photographs by Keith Ellenbogen

Go on a trip to the Amazon with conservation biologist Scott Dowd to learn about how fish like tiny cardinal tetras are important to the ecosystem.

Crow Smarts: Inside the Brain of the World’s Brightest Bird by Pamela S. Turner and photographs by Andy Comins

Written with light humor (one of the crows is named “Crow we never got around to naming”) and illustrated with birds-eye-view photographs (like the one on the cover). Whether you have read all of books in the Scientists in the Field series or none of them, you are going to want to pick up this one. Perfect for anyone interested in learning, tool use and birds, including budding animal behaviorists, ornithologists, psychologists and educators.

Full review at Growing With Science.

The Octopus Scientists (Scientists in the Field Series)

by Sy Montgomery and illustrated by Keith Ellenbogen

The Octopus Scientists:  Exploring the Mind of a Mollusk follows four octopus researchers from very different backgrounds as they look for octopuses around the island of Moorea in the Pacific Ocean. Canadian Jennifer Mather wanted to study marine biology, but found resistance in what was perceived as a “man’s” field. Instead she became a psychology professor and then applied her studies to octopuses. American David Scheel studied lions for his doctorate degree, but when he couldn’t find a job working with lions, switched to marine biology. Tatiana Leite is a professor of marine ecology in Brazil. Keely Langford works at the Vancouver Aquarium.

If you have ever wanted to don a wet suit and search the ocean floor for octopuses, The Octopus Scientists is the book for you. If not, reading it might just make you want to give it a try.

by Loree Griffin Burns and illustrated by Ellen Harasimowicz

Beetle Busters reveals how researchers are tackling a destructive insect, the Asian longhorned beetle, that is eating hardwood trees in New England. It contains information about the life cycle of the beetle, the history of its introduction to North America, details about how scientists are studying the insects, and a in-depth explanation how concerned citizens can get involved. Burns also reveals some information about how cutting down trees changes habitats and some evidence that ecosystems can recover eventually through succession.

Full review at Growing with Science

The Next Wave: The Quest to Harness the Power of the Oceans

The Next Wave introduces young readers to an exciting new technology that will capture the energy of waves and convert it to useful electrical energy. Rusch starts the book with a description of the power of waves. She then delves into the early lives of two engineers who are working on converting wave energy into electricity. This section about the “Two Mikes” gives examples of young scientists of similar age or only slightly older than the target reader, drawing them into the story. She follows with an overview of the research of several competing groups, showing the progress and setbacks of this interesting field.

The book will definitely inspire young readers who enjoy STEM and want explore waves and oceans. It is also a great resource for adults who want to learn more about research on this potential new source of energy.

Reviewed at Wrapped in Foil blog

Sea Turtle Scientist reveals Dr. Kimberly Stewart’s efforts to investigate and conserve sea turtles on the Caribbean Island of St. Kitts. As with others of the series, it reveals what it is like to work as a scientist, trudging through sand in the middle of the night or taking samples from poached sea turtles. Sea Turtle Scientist will make you want to jump on a plane and become a sea turtle scientist, too.

Related activities and information about sea turtles at Growing with Science

Chasing Cheetahs: The Race to Save Africa’s Fastest Cat (Scientists in the Field Series)

Chasing Cheetahs highlights the work of Dr. Lauren Marker and her colleagues with cheetahs in Namibia. Sadly, the numbers of cheetahs have fallen to fewer than 10,000 in the world. To do something concrete to prevent cheetahs from going extinct, Dr. Marker has started the Cheetah Conservation Fund. This organization not only rescues injured and orphaned cheetahs, but also helps educate and work with the local farmers to increase chances of cheetah survival.

by Mary Kay Carson with photographs by Tom Uhlman

When you think of national parks, you may think of hiking, wildlife and getting away from it all, but probably you probably don’t think of science. This title goes a long ways toward remedying that omission. The authors catch a reader’s attention with everything from geysers and grizzlies in Yellowstone National Park to salamanders and fire flies in the Great Smoky Mountains, and they have also chosen a range of people to focus on, from geologist park rangers to citizen scientist high school students.

The Dolphins of Shark Bay (Scientists in the Field Series)

This outstanding book encapsulates over twenty-five years of research into dolphin intelligence by scientist Janet Mann and her colleagues working at Shark Bay in Australia. It reveals how science is done in the field, plus gives loads of information about wild bottlenose dolphins. It also asks some hard questions about whether these highly-intelligent animals should be kept in captivity solely for our enjoyment.

Full Review at Growing with Science

Right away, a warning: this is not a picture book! It would probably be best from mature readers, ages 12 and up. The books contains large, full color photographs of dead, decaying horses, and a discussion of a birth control program developed for horses. That said, for older readers interested in science, and particularly horses, this book is a must have.

Horse-related activities to accompany the book at Growing with Science

The Hive Detectives: Chronicle of a Honey Bee Catastrophe (Scientists in the Field Series)

by Loree Griffin Burns and photographs by Ellen Harasimowicz

Loree Griffin Burns starts the book with a visit to beekeeper Mary Duane’s backyard. Mary calmly works the bees as she explains many aspects of honey bee biology and the culture techniques she uses. The author moves next to colony collapse disorder or CCD – the problem with honey bees disappearing that has been in the news- and introduces us to four bee scientists who are at the front lines of CCD research. Finally, Burns wraps up by taking us back to Mary Duane’s beeyard for a lesson about gathering and processing honey.

by Sy Montgomery and photographs by Nic Bishop

The Tapir Scientist: Saving South America’s Largest Mammal features the work of scientist Patricia Medici and her team in the Pantanal region of Brazil. What are tapirs and why study them? Tapirs are unusual-looking animals with long noses that we know little about. There are four different kinds in the world: Malayan, Bairds’s, mountain and lowland. This book concentrates on the lowland tapir that lives both in grasslands and rainforests of Brazil. Because they eat large quantities of fruit, these elusive creatures move seeds from place to place, serving an important role in the ecosystem.

Full Review at Wrapped in Foil

by Bridget Heos with illustrations by Andy Comins

Eruption!: Volcanoes and the Science of Saving Lives

by Elizabeth Rusch and illustrated by Tom Uhlman

This book follows the experiences of USGS volcanologist John Pallister and his team from of the Cascades Volcano Observatory as they participate in VDAP or the Volcano Disaster Assistance Program. VDAP is an international effort to provide assistance to any country impacted by volcanoes that asks for help in monitoring and predicting eruptions. The program was formed after the deadly eruption of Colombia’s Nevado del Ruiz in 1985.

Exciting and well-written, this book is a must for budding volcanologists and geologists. It would also be great to accompany units on volcanoes, earth science and for investigating how scientists do their jobs.

Review and related activities at Growing With Science blog

The Manatee Scientists follows scientists from around the world trying to learn more about manatees in a race protect them from extinction. Peter Lourie documents the techniques the scientists use and the problems they encounter. In the Amazon River basin, the author accompanies Fernando Rosas on a boat trip to follow radio-tagged manatees that have been released from captivity.  He flies with John Reynolds, who does an aerial count of manatees in warm Florida waters, and shows researcher Lucy Keith rescuing West African manatees trapped behind a dam in Senegal.

Full Review at Wrapped in Foil

The Elephant Scientist (Scientists in the Field Series)

by Caitlin O’Connell and Donna M. Jackson with photographs by the first author and her husband, Timothy Rodwell

Unlike other books in the series, the scientist in the spotlight in The Elephant Scientist is one of the co-authors, Dr. Caitlin O’Connell. It follows Dr. O’Connell as she studies elephant social life and communication and at the same time works on ways to prevent elephants from ruining crops planted by local people. She discovers that elephants communicate to one another over long distances by detecting vibrations in the ground with their feet and trunks.

Summary review at Wrapped in Foil

by Pamela S. Turner and illustrated by Andy Comins

by Mary Kay Carson and photographs by her husband, Tom Uhlman

Author Carson accompanies bat scientist Merlin Tuttle into a cave in Texas to find out what studying bats in like. Immediately the reader learns that this field is not for the squeamish. Why would anyone wade through bat guano teeming with insects while breathing through a respirator in a smelly cave at temperatures of 100° F? They do it because it turns out that bats are pretty important in the scheme of things. By learning more about them, hopefully we can protect these fragile and misunderstood little creatures before it is too late.

by Sy Montgomery with photographs by Nic Bishop

With the team of experienced nature writer Sy Montgomery and and fabulous photographer Nic Bishop, you know this book is going to be high quality. What really tips this book into another category is their obvious passion for the topic. You can tell these two are thrilled to be freezing and wet on a remote island near Antartica chasing the kakapo story to share with us. In addition, the kakapos are so endearing that you won’t be able to put the book down.

Tracking Trash: Flotsam, Jetsam, and the Science of Ocean Motion (Scientists in the Field Series)

This title is about Dr. Curt Ebbesmeyer, an oceanographer who studies the huge streams of water flowing through the ocean, called currents. He finds clues to ocean water movement by looking at trash that comes up on the beach after spills in the ocean. It is really a fascinating book.

Summary and related activities at Growing With Science

by Pamela S. Turner and illustrated by Scott Tuason

by Sy Montgomery and photographs by Nic Bishop