Most of us learn about chemistry from a textbook, but that doesn’t have to be the only way. There are a number of popular science books about chemistry. Many are written for adults, but may be appropriate for young adults as well. If you have any question as to how appropriate a given title might be for your child(ren), be sure to read it yourself first. 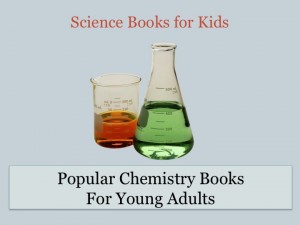 Breaking into a topic that has gotten very little attention, Jonathan Waldman explores how rust quietly changes our lives.

Like rusty metal, the book is somewhat tarnished by uneven text, although with some skimming it is possible to find bits that will be interesting to young chemists. For example, the story of the Statue of Liberty shows how very little we know about the chemistry of corrosion and is tightly constructed. On the other hand, the author goes on a walkabout by over-describing a visit with rust photographer, Alyssha Eve Csük (that is not to say that Csük’s abstract photographs are flawed, because they are very beautiful and intriguing. They are simply better seen than described.)  Rust also lacks a bibliography and an index, making it less useful as a research tool. Too bad, because with a bit of polish, this could have been an excellent book and those who are deeply interested in chemistry, history, and human culture will find it worthwhile.

Your Atomic Self: The Invisible Elements That Connect You to Everything Else in the Universe

Although all matter in the universe is made up of atoms, Dr. Stager has chosen to use the human body as his point of reference, which provides general readers with both a way to relate to the information and a sense of scale.

Rather than an in-depth exploration of human biology, however, it is more like a wandering walk using our basic knowledge of ourselves as a trail marker for exploring the world of elements. The “walk” covers topics from why the sky is blue to how the nitrogen atoms from salmon end up in spruce trees in the Pacific Northwest. The text is roughly organized by sections on the most common elements:  carbon, nitrogen, oxygen, hydrogen, etc.

(Note:  The book does contain references to what happens to bodies after death, which may not be appropriate for some younger teens.)

The Disappearing Spoon: And Other True Tales of Madness, Love, and the History of the World from the Periodic Table of the Elements

This title is also about elements, but is covers the groups in the periodic table as units. How was an element discovered and who discovered it? Why is it useful and what properties does it have? Interesting tidbits, such as the use of gallium by practical jokers to create “disappearing spoons,” keeps the reader engaged and enthralled.

Periodic Tales: A Cultural History of the Elements, from Arsenic to Zinc

As suggested by the title, this book is not so much scientific as a cultural history of how we humans have discovered and use the chemical elements.

The Elements: A Visual Exploration of Every Known Atom in the Universe

by Theodore Gray, with photographs by Nick Mann

Really a photographic wonder, this book is a series of two-page spreads for each of the first 100 elements. The author has found concrete examples of every element in its pure form, giving the reader a visual understanding of their properties. It is intriguing, unique and entirely appropriate for children.

To get an idea what the book and cards below are like, Theodore Gray has his periodic table of element photographs at http://periodictable.com. To look at each element, click on the photograph.

The Photographic Card Deck of The Elements: With Big Beautiful Photographs of All 118 Elements in the Periodic Table

Same author and photographer as the above book, but in a card format.

This title probably contains the most “adult” themes of any in this list, but it also differs from the others because it concentrates on molecules rather than elements.The 17 molecules were chosen for their historical importance.

The Cartoon Guide to Chemistry

by Larry Gonick and Craig Criddle

Cartoon guides like this one are a great way for visual learners to grasp complicated material. Might also draw in older reluctant readers who are intimidated by textbooks.

Nature’s Building Blocks: An A-Z Guide to the Elements

The serious chemistry student may enjoy reading this book from cover to cover, but it also serves as an excellent handy reference to the elements.