Rather than focus on a certain kind of animal, sometimes children want to investigate the groups of living organisms found in a particular habitat. For this post, we are going to focus on animals found around the North and South Poles. 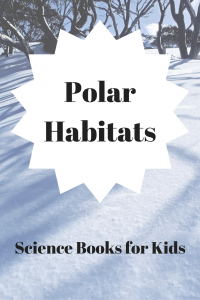 National Geographic Children’s books pair top quality photographs with clear, age -appropriate informational text. Polar bears are in the news today, and this book is a great introduction for the youngest reader.

Grouped by whether they occur on the land, in the sea, or in the air, this book features many of the key animals found in the Arctic.

About Habitats: Polar Regions by Cathryn Sill and illustrated by John Sill

The Sills are a talented couple who have been collaborating on books in the About Habitats series. If you have seen their work before, you know what to expect. John Sill’s gorgeous watercolor illustrations catch the readers’ eyes. Then they turn to Cathryn Sill’s clear, uncomplicated language. In remarkably few words she explains the scene and draws readers into it.

The photographs in the book are the author, Mark Newman, who is a famous wildlife photographer. Need I say more?

Where Do Polar Bears Live? (Let’s-Read-and-Find-Out Science 2) by Sarah L. Thomson and Illustrated by Jason Chin

The Let’s-Read-and-Find-Out Science series books are always well-researched and informative. Add illustrations by award-winning author-illustrator Jason Chin and you have a treat.

Gail Gibbons is the queen of children’s nonfiction. She always seems to know what questions children ask.This book covers the life of polar bears in detail.

Polar Bears and Penguins: A Compare and Contrast Book by Katharine Hall

Ever see a picture or cartoon with penguins and polar bears in the same scene? This book carefully explains why that is incorrect and covers the life of each animal.

As you can see from the images on the cover, this books deals with animals in cold places from polar bears in the Arctic to penguins in the Antarctic. In fact, maps of the two poles are included, as well as a sidebar with the average summer and winter temperatures in both regions.

Do you know what a bergy bit or a growler are? Not only does the book cover animals, but also other unique aspects of the habitat. (Bergy bits and growlers are different types of ice that can be found floating in seawater.)

Polar Animals is an enjoyable introduction to the animals in the Arctic and Antarctic regions. It has something from everyone because it offers both a fast facts and breathtaking photographs for the casual reader, and sufficient in-depth information for the more serious reader.

Ice Is Nice!: All About the North and South Poles (Cat in the Hat’s Learning Library) by Bonnie Worth and illustrated by Aristides Ruiz and Joe Mathieu

The books in the Cat in the Hat’s Learning Library series use familiar characters and rhyming text to bring nonfiction to a wider audience. Excellent series!

Little Penguin: The Emperor of Antarctica by Jonathan London and illustrated by Julie Olson

Young children will relate to this story about the first few months in a young penguin’s life.

Hopping Ahead of Climate Change by Sneed B. Collard III

Many people have heard about the plight of polar bears, having to swim farther and farther to find food because of the melting sea ice in the Arctic. This book discusses Professor Scott Mills’s research on the effects of climate change on a smaller, cuter animal: the snowshoe hare.

The book is illustrated with color photographs of hares and their habitats, as well as helpful graphs, charts, and maps. Although it may look superficially like a picture book, this is a solidly middle grade title for readers 10 years old and older.

Pick up Hopping Ahead of Climate Change for students interested in environmental issues, animals, or science. You will be glad you did.