What is more inspiring than space?

If you are doing a science theme about space or the solar system and are looking for books for children, you’ve come to the right place. (Note:  Linked titles go to Amazon for more information. Please see the disclaimer below). The titles are organized by reading level. 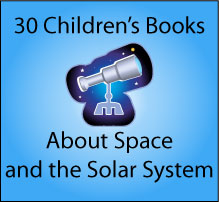 Stars and Constellations (Heinemann First Library: The Night Sky: And Other Amazing Sights in Space)

by Nick Hunter explores what stars are, where they come from, what makes them shine, what people thought of them in the past, and how we study stars today, starting with the nearest star, the Sun. A fun activity is provided along with advice on viewing stars.

Combining spare, imaginative text with denser scientific explanations, this book has potential for a multitude of uses. It can be a lovely bedtime book, the basis for a language arts lesson, or a great accompaniment to a lesson on the solar system.

Salas must inspire her illustrators to greatness, because Jaime Kim’s art positively shines.

If You Were the Moon is a must have for budding astronomers and poets everywhere.

Picture Books about the Planets/Solar System:

Picture books About the Lunar Landing:

Footprints on the Moon

Illustrated with photographs, this book documents

Moonshot: The Flight of Apollo 11

by Brian Floca is an extraordinary book. You can tell the minute you open it and see the front endpapers, which have exquisite, detailed illustrations of Apollo 11.

by Robert Burleigh and illustrated by Mike Wimmer

Another book to commemorate the 40th anniversary lunar landing, it is also well done.

Look to the Stars

by Buzz Aldrin and illustrated by Wendell Minor is remarkable because it is much more than merely an account by the second human being to touch the surface of the moon. Dr. Aldrin shows us how this incredible accomplishment is part of a long history of discoveries and advancements, and how it may lead to many more new things in the future.

by Franklyn M. Branley and illustrated by Felicia Bond

This title is about the constellations you can see in the night sky. Because it is illustrated by Felicia Bond (Give a Mouse a Cookie), it has a different look than some of the others that come later in the series.

by Franklyn M. Branley and illustrated by Barbara & Ed Emberley

by Franklyn M. Branley and illustrated by Molly Coxe

Space, Stars, and the Beginning of Time: What the Hubble Telescope Saw

A history of the Hubble Telescope and overview of how the images it has captured have added to the field of astronomy. Although written for middle grades, it is also useful for adults wishing to brush up on the topic.

A Black Hole Is Not a Hole

Earthrise: My Adventures as an Apollo 14 Astronaut

by Edgar Mitchell, Ellen Mahoney, and with a foreword by Dr. Brian Cox

Fast-paced autobiography of Dr. Edgar Mitchell, who went to the moon in 1971 on Apollo 14. Although obviously a must-have resource for future astronauts, Earthrise is also likely to appeal to those interested in history, science, engineering, and aviation. It is a revealing look at how one man’s sense of adventure took him places that the rest of us can only imagine.

Full review at Growing with Science.

Are you ready to try science poetry now? Check out our list of space and astronomy poetry books for kids.

5 Replies to “30 Space and Astronomy Books for Children”