If you are doing a science theme about planets or the solar system and are looking for books for children, you’ve come to the right place. (Note:  Linked titles go to Amazon for more information. Please see the disclaimer below).

The titles are organized by genre and reading level.

Follow the “Nerdy Baby” astronauts as they travel into space (floating), orbit around the sun, go back to the moon, then discover each of the planets in the solar system, with one significant fact noted about each.

The pacing, vocabulary, and information presented all work perfectly for preschoolers in the 4-5 year old range.

The only thing that was off-putting was that the author included the Nerdy Baby branding in the text. Preschoolers might not like to be called babies (or nerdy), so decide how you want to deal with that part.

Overall, Nerdy Babies: Space is a sweet, well-paced introduction to our solar system.

With interest in travel to Mars expanding, Carson makes a detailed comparison between Mars and the Earth while describing the history of Mars exploration, right up to the recent Mars rovers.

What are exoplanets? Exoplanets are planets found outside our solar system. The first confirmed exoplanet was discovered in 1992, but many, many are now known.

Seymour Simon talks about his inspiration for the book in this video:

Saturn Could Sail (Did You Know?)

by Laura Lyn DiSiena and Hannah Eliot, with illustrations by Pete Oswald and Aaron Spurgeon

Do you know what the title Saturn Could Sail refers to? It turns out Saturn is less dense than water and could float in it if one could find a container of water large enough. Given our experience has mostly been with our own rocky planet, which is much denser than water, the fact a something as huge as a planet could float is very surprising to think about.

This books is full of the kind of thought-provoking facts that a certain type of child is going to soak up like a sponge and then bring up every chance he or she gets, usually prefaced with the words, “Did you know…?”

Destined for Space: Our Story of Exploration (Smithsonian)

Don Nardo is foremost a historian and he brings a historical perspective to the human exploration of space. Starting with the observations of the earliest humans, he gives a fast-paced overview of what we have learned and accomplished in our quest to figure out, “What’s out there?” 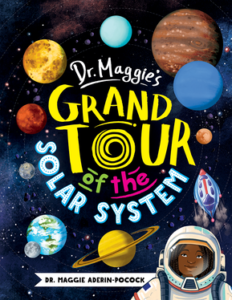 Space scientist Dr. Maggie guides the reader around our solar system, supported by incredible visual elements. What’s best about this book is that readers can read in order for a clear, logical progression or they can browse sections for specific topics of interest. The sidebars also break the text into delicious readable chunks.

Dr. Maggie’s Grand Tour  of the Solar System will enthrall budding astronomers and astronauts alike. Pick up a copy for the ride of your life.

As with other in the excellent Scientists in the Field series, The Mighty Mars Rovers focuses on the work of Steven Squyres, professor of astronomy at Cornell University and lead scientist on the mission.

Follow the twin rovers, Spirit and Opportunity, as they explore Mars. Learn how scientists determined that there was once water on Mars and how the NASA team resolved problems with the rovers from afar in order to prolong the mission.