Young children often go through a phase when they are fascinated by the moon. You’ll want to have these books ready to satisfy their scientific curiosity. 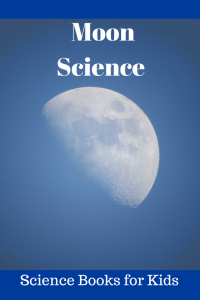 And see our related lists of children’s books about:

Picture Books about the Moon

Although the sweet Moon face on the cover and the fact Moon! is narrated by the Moon (in first person) might make you think this picture book is for the youngest reader, in fact it is for older children.

Inside you will find some big numbers and complex scientific concepts. For example,

There’s also a summary or the most recent ideas about how the moon formed when a planet-like rock the size of Mars crashed into the Earth.

Moon! is for serious young readers who enjoy learning science facts. However, it might also be a good choice for older reluctant readers who will be sucked in by the less serious aspects.

Combining spare, imaginative text on one level with denser scientific explanations, this book has potential for a multitude of uses. It can be a lovely bedtime book, the basis for a language arts lesson, or a great accompaniment to a lesson on the solar system.

If You Were the Moon is a must have for budding astronomers and poets everywhere.

by Franklyn M. Branley and illustrated by Barbara & Ed Emberley

This explanation of the phases of the moon incorporates a demonstration using an orange and a flashlight right in the text. It is all young readers will need to explore this concept in enough different ways to gain understanding.

The Moon Book by Gail Gibbons

Gail Gibbons has an incredible knack for knowing exactly what young children want to learn and how to explain it to them. Includes explanations of solar and lunar eclipses.

Middle Grade Books About the Moon

Luna: The Science and Stories of Our Moon by David A. Aguilar

Beginning with how the moon is thought to have come about and how the moon compares with Earth, Aguilar then takes the reader on a ride through other moons, as well as moon myths and hoaxes, before settling down for a detailed discussion of moon features. Perfect for lunar landing anniversaries is a section about what the Apollo astronauts discovered.

The pluses:  The book is filled with fantastic illustrations by David A. Agulilar. Also there are three hands-on activities in the back: making a 3D model of lunar craters with Plaster of Paris, using a small telescope to explore the moon, and directions for drawing the moon.

The Moon by Hannah Pang and illustrated by Thomas Hegbrook

Discover the history of mankind’s relationship with the Moon: the science, the myths, the facts, the fiction, and how it affects our everyday lives and the world around us.

Beginning Reader about the Lunar Landing

DK Readers L3: Spacebusters: The Race to the Moon by Philip Wilkinson

Picture books About the Lunar Landing:

The Astronaut Who Painted the Moon: The True Story of Alan Bean by Dean Robbins and illustrated by Sean Rubin

Pete Conrad and Alan Bean were the third and fourth people to walk on the moon, but they aren’t the household names their predecessors Buzz Aldrin and Neil Armstrong are. This picture book helps correct that omission and bring Alan Bean’s story to the next generation of readers.

As to be expected, the illustrations are amazing. They combine the look of Alan Bean’s art with Sean Rubin’s skillful images. The highlight is a wordless two-page spread of the surface of the moon with the shadows of the two astronauts in the foreground and the blue, spherical Earth in the distance. Wow!

The Astronaut Who Painted the Moon will thrill budding astronauts and artists alike.

Footprints on the Moon

Illustrated with stunning photographs, this book documents the human quest to walk on the moon. It covers both history, starting with Galileo and Robert Goddard, and takes the reader through the Apollo missions.

Moonshot: The Flight of Apollo 11 by Brian Floca is an extraordinary book. You can tell the minute you open it and see the front endpapers, which have exquisite, detailed illustrations of Apollo 11.

The story itself begins with a well-grounded view of the moon from the earth. Simple, poetic words start you on your journey, a journey like no other. The first trip to the moon.

Following the astronauts as they get ready, you hear the clicks of their equipment as the pieces snap into place. Before long the earth is shaking, as the rocket takes off. The pace, the number of words and the energy all accelerate as the Eagle is about to land. Wow!

by Robert Burleigh and illustrated by Mike Wimmer

In yet another book to commemorate the 40th anniversary lunar landing, One Giant Leap gives a lyrical, imaginative description of the landing itself.

Look to the Stars

by Buzz Aldrin and illustrated by Wendell Minor is remarkable because it is much more than merely an account by the second human being to touch the surface of the moon. Dr. Aldrin shows us how this incredible accomplishment is part of a long history of discoveries and advancements, and how it may lead to many more new things in the future.

Although it sounds complicated, it is actually simply very well organized. After reading it, you will wonder why more books aren’t organized this way.

Far Side of the Moon: The Story of Apollo 11’s Third Man by Alex Irvine and illustrated by Ben Bishop

This is a unique book for two reasons. First of all, it is presented in a graphic novel style, which may appeal to a different range of readers. Secondly, it’s about astronaut Michael Collins, who commanded the lunar orbiter while Neil Armstrong and Buzz Aldrin landed on the moon. His story isn’t mentioned as often.

Science Project Ideas About the Moon by Robert Gardner

This older title contains background information about the moon and a number of detailed experiments, such as watching the moon (observation), building models, and making a simple reflecting telescope. It contains all the instructions the reader will need and no frills.

The illustrations are straightforward and effective line drawings.

Earthrise: My Adventures as an Apollo 14 Astronaut

by Edgar Mitchell, Ellen Mahoney, and with a foreword by Dr. Brian Cox

Fast-paced autobiography of Dr. Edgar Mitchell, who went to the moon in 1971 on Apollo 14. Although obviously a must-have resource for future astronauts, Earthrise is also likely to appeal to those interested in history, science, engineering, and aviation. It is a revealing look at how one man’s sense of adventure took him places that the rest of us can only imagine.

Full review at Growing with Science.

Our family enjoyed this delightful folktale about the phases of the moon.